Driven to make biodiesel and partnered with a biodiesel refinery, Green Futures has a plan to turn waste oil into fuel. The concept is nothing new, though the way they go about it is special and benefits local economies.

It’s true. Diesel engines can run on fuel made from used vegetable oil. Celebs from Daryl Hannah to our pals at GreaseCar.com know that it makes sense to run our cars on old french fry oil. But the idea hasn’t grown up that much. It hasn’t reached critical mass, even in an era of pricey petrol.

Restaurants and just about everywhere people cook food, use fryers. From french fries to tortillas, egg rolls to onion rings, all use vegetable oil. Sooner rather than later, that oil needs to get swapped for clean stuff and that’s where Green Futures comes in.

In most cases, restaurants and food facilities pay for someone to come in and take away the old oil. Some services pay for the privilege, though for pennies on the dollar. But worse, do you know what happens to all that old oil? The bulk of it gets sprayed on food stock, chickens and such as a, get this, nutrient supplement. The practice is actually banned in the European Union. In 2002, when Mad Cow disease swept the EU, they figured out that used grease isn’t really that good an idea, as harmful bacteria enters the food supply. But old oil does makes for some tasty biodiesel fuel.

Working with Community Greenhouse Foundation, a non profit sustainability facilitator that we’ve known for over eight years, we were asked to brainstorm creative ways to get the word out. Working form our favorite blogging platform, WordPress, we built a powerful social media focused site and outreach platform.

Restaurants donate their oil and Green Futures picks it up, keeping their kitchens clean and green. In exchange they get a tax credit, worth much more than they’ve ever been paid for their waste vegetable oil–sometimes even 10 times as much. 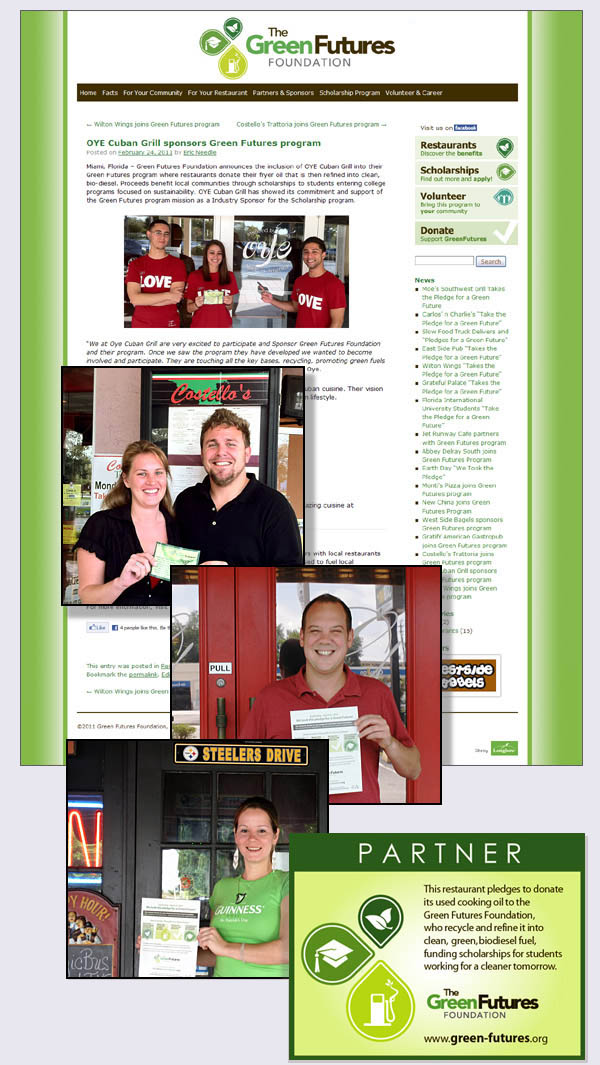 The Green Futures site then talks about each restaurant that takes the pledge for a greener future. We promote them and build up their facebook traffic. And everyone wins.

To seal the deal, proceeds go towards education and scholarships, helping local college students pay for tuition for classes and degrees in sustainability, renewable and alternative energy. Win-Win-Win!

Social Media is not just a link to Facebook—it’s connecting with people. It’s a two-way dialog with your customers. To help you spread the word about your business or non-profit contact us today.

See how we can add value with Social Media management