Local Ad Club, AAF Space Coast, has earned a 2016 Club Achievement Award for their Government Relations work. Winners were honored at The Salute to Achievers Ceremony at ADMERICA, the AAF’s annual national conference, in June in Anaheim, California at the Disneyland Resort. 46 of the American Advertising Federation’s (AAF) member clubs across eight categories of entry recieved such recognition.

The 2015-16 year was remarkable for Brevard County, Florida—as both Senate President, Andy Gardiner, and House Speaker Steve Crisifulli hailed from our county. This gave our club an opportunity to schedule meetings with not only our local State reps and Senators, but leadership as well.

Taking advantage of the alignment, our team helped secure meetings, and lead presentations.

Advocacy is a major function of the AAF. It’s members represent all the myriad businesses that make up the advertising industry. From traditional advertising and marketing agencies and the people who work there, AAF includes many disciplines, including printers, promotional product vendors, video and film production, web design and search gurus, writers, editors, and many more. Advertisers, newspapers, television and radio, corporate members, public relations and digital organizations also make up the constituency. AAF is the unifying voice for advertising and as such, they speak for many causes critical to member businesses.

“We brought a delegation of eighteen members to State leadership, to discuss issues that affect the advertising industry.” Eric Needle relates. “We also met with four of our local reps, Ritch Workman, Tom Goodman, John Tobias, and Thad Altman’s chief of staff.”

Our mission was to relay the state of the economy as we see it. Often, our businesses are early indicators of strength or weakness in the markets. When business is good, people advertise and during recession, they pull back. Building relationships with our State and local reps is an important function as we watch for legislation that can impact or help our members.

For our club, we brought back the message of how State government works. When groups of like-minded people collaborate, their collective voice can be heard. Those who participated bring home a much greater understanding of State government and the value of teamwork and collaboration, fulfilling an equal goal of our clubs, professional development. 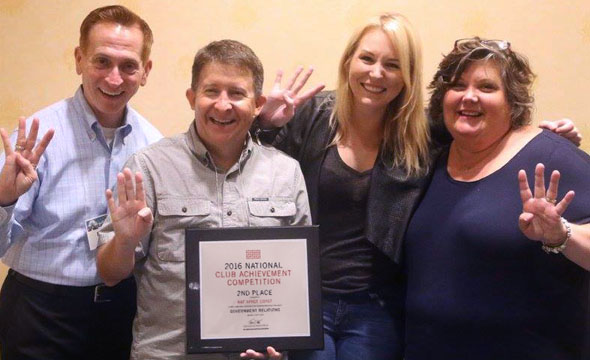 The AAF’s Club Achievement Competition is designed to recognize outstanding accomplishments of its affiliated advertising clubs, showcasing the programs and projects its professional member clubs undertake each year. It was established to honor significant contributions to the AAF network of professional advertising clubs and to encourage excellence in areas of club operations that strengthen the AAF’s member clubs.

“This year, there were nearly 300 entries,” said Joanne Schecter, Executive Vice President, AAF Club Services. “This outstanding work represents hours upon hours of dedicated volunteer time. The award winning work is a testimony to the successful programs and projects our clubs launch every year.”

Intended to recognize excellence and encourage high standards among industry professionals, the Competition awards local advertising clubs for their initiatives in eight categories: Advertising Education, Communications, Club Operations, Diversity and Multicultural Initiatives, Government Relations, Membership Development, Programs and Public Service. Clubs with the highest total winning scores are awarded the distinction of Club of the Year and includes the honor of President of the Year.

For all the winners, visit aaf.org/

For more information, join us at aafspacecoast.org